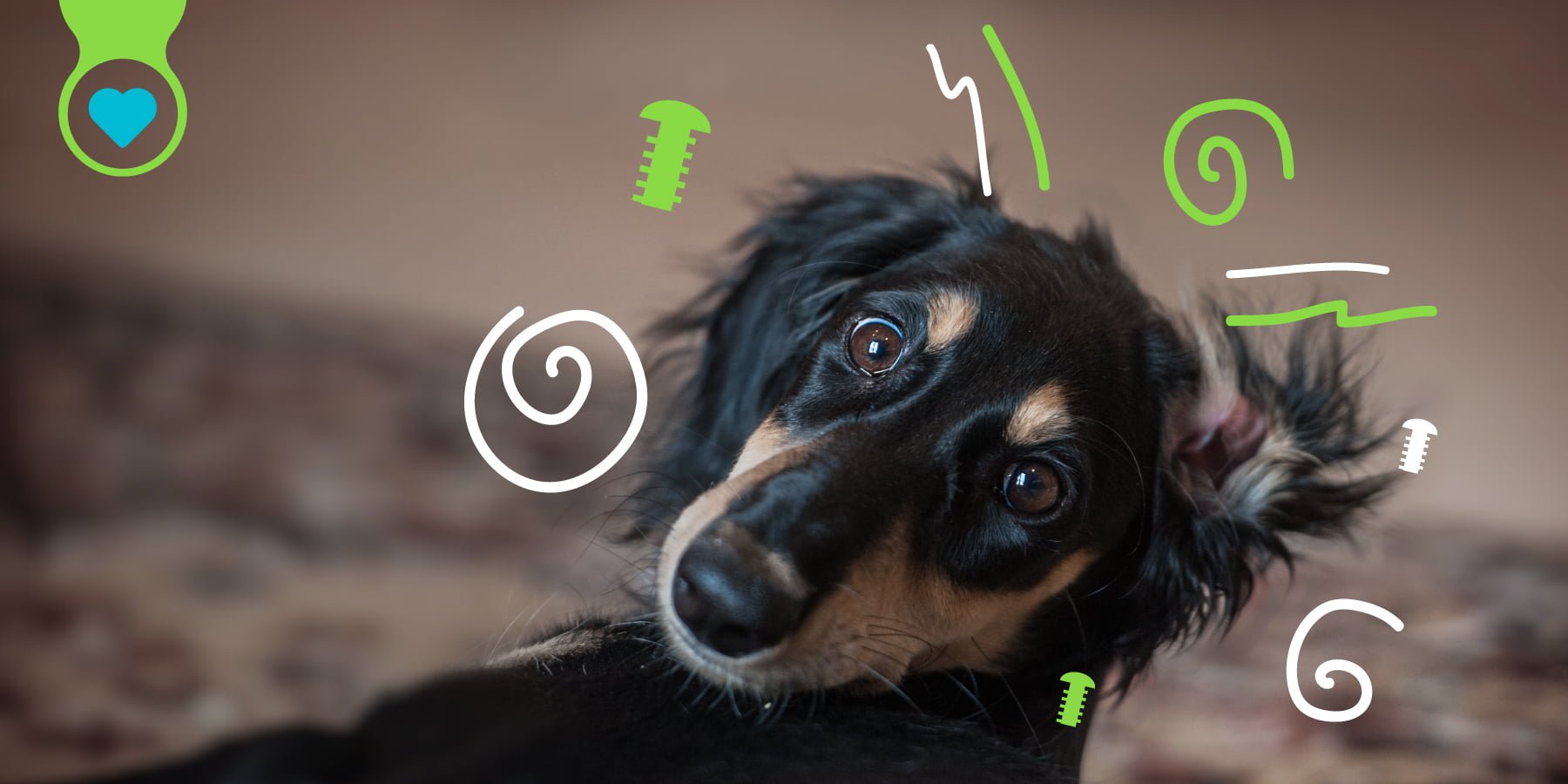 Dogs that never get tired, never stop, never relax… do you think this behavior is normal behavior? Well no, we are talking about hyperactive dogs.

Hyperactivity can be a congenital and hereditary defect that can cause some hyperactive dogs to be aggressive and not respond well to training.

It is also possible that hyperactive dogs are the result of a lack of stimulation, e.g., too little play and going outside. These may be the causes of hyperactive dogs overreacting, jumping up and barking for attention.

If you think the same thing happens to your dog or you are confusing it with the hyperexcitability typical of puppies, in this Las Almenas article we are going to talk about hyperactive dogs, their causes, symptoms and practical solutions.

The first thing to understand about hyperactive dogs is that they can be affected by two types of hyperactivity:

That which can be produced by learning or by some type of disorder, such as separation stress (https://almenas.es/estres-por-separacion-en-perros-que-es-lo-que-le-pasa/). In this type of hyperactivity, which is the most common, having a dog trainer can help you to solve this type of behavior.

This is sometimes due to a disease called hyperkinesis, which could be equivalent to the so-called attention deficit in people. This problem is caused by an alteration of the dopamine pathways of hyperactive dogs. In these cases, instead of resorting to an educator or dog trainer, veterinary treatment should be required. 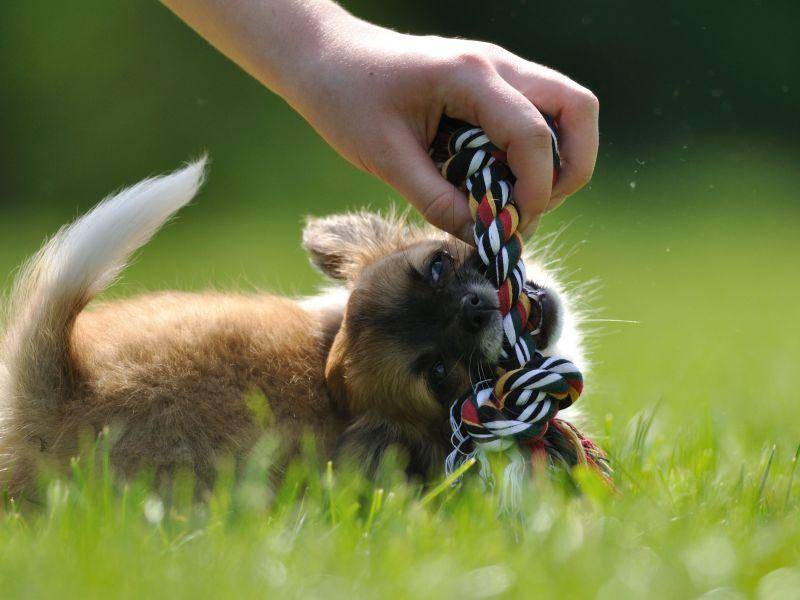 Since we are talking about two types of hyperactivity, we are going to tell you the main symptoms of each of them so that you can see if your dog’s behavior fits either of them:

In the case of pathological hyperactivity, the symptoms are:

The symptoms of hyperactive dogs of the physiological mode, which is the most common, are:

Puppies are hyperactive by nature

Puppies have a natural predisposition to play and move around, it is their way of relating. This type of hyperactivity is normal and corrects itself with age. When dogs are over two years old and are no longer puppies, they are much calmer and more focused. When they are past the age of mischief, their behavior undergoes noticeable changes. If this is not the case, it is best to consult your veterinarian.

As we have already mentioned, pathological hyperactivity is due to hyperkinesis. This is a rare disorder that begins at an early age and is due to alterations of the nervous pathways, affecting dopamine, serotonin and noradrenaline in hyperactive dogs.

When diagnosing this type of hyperactivity, a methylphenidate test is performed. If this test is negative, then we are possibly dealing with a case of physiological hyperactivity.

In the case of physiological hyperactivity, the causes of this behavior in hyperactive dogs are in their learning. Generally, it happens when we positively reinforce certain very effusive attitudes of hyperactive dogs.

If, for example, we let the dog get overly excited when someone comes to the house or we play with him in an uncontrolled way without setting limits, we are reinforcing negative attitudes. We may not be aware of these negative reinforcements until it is too late. It is then that the dog wants to continue seeking attention from his human family.

In addition, there are other causes of physiological hyperactivity, such as separation disorders, which we have already mentioned. 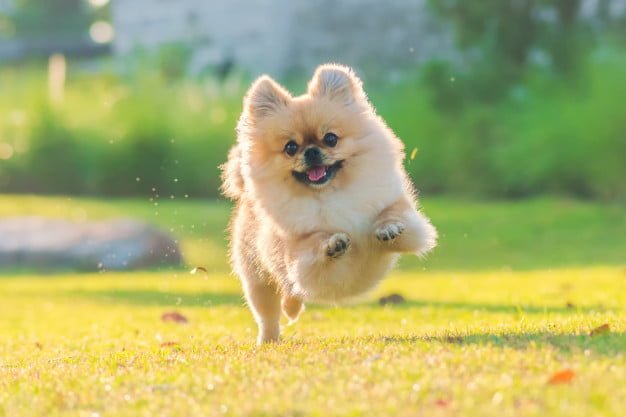 If your dog suffers from pathological hyperactivity due to hyperkinesis, then you will have to go to the veterinarian for a pharmacological treatment to regulate the correct function of his organism. Surely in a few days you will see how your hyperactive dog’s behavior improves.

If your dog suffers physiological hyperactivity, which is the most normal, you will have to go to an educator to help you determine the problem and the most effective guidelines for your case. However, from Las Almenas we advance you a series of guidelines that you and your family will have to follow:

If up to now you have consented to certain attitudes, it is time to change. Ignore those excitable behaviors, such as jumping up and down, barking and crying to get your attention. If you don’t ignore him, the dog has finally achieved his goal of getting your attention.

No scolding, no aggression, no yelling. Hyperactive dogs, if they suffer so much stress, cannot recover. Stressed dogs cannot learn due to lack of concentration.

Leave well marked hours of walking, physical exercise, meals and rest. Dogs need stability and routine is essential for hyperactive dogs to improve their attitude. This avoids anticipatory excitement because the dog already knows what is going to happen at every moment of the day.

Such as gnawing bones or interactive toys. If he plays with other dogs, you should be present and control the situation. If your dog gets upset you can apply a negative punishment, that is, you should take away something positive for the dog. For example, you could tie him up and take him away from the play area or leave him present but still until he calms down. 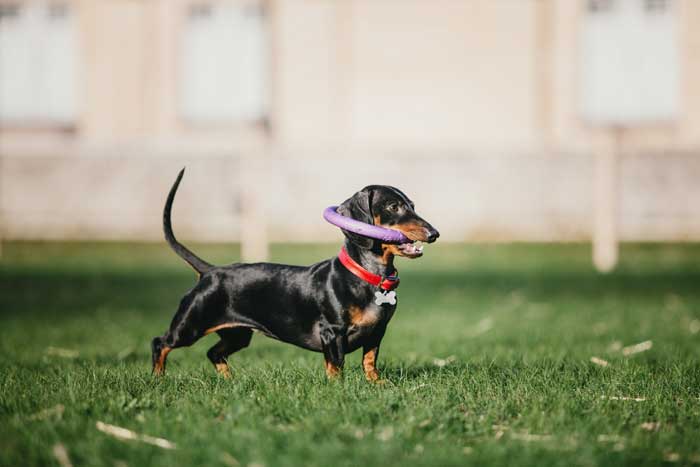 Fortunately, getting your dog to be calmer and more attentive can be improved through training. You can turn to a professional dog trainer or implement some simple exercises that will improve the attention of hyperactive dogs.

It is clear that if you want your dog to listen to you and be obedient, he will need a minimum of attention. Sometimes, the fact that your dog does not respond to your call is not always a matter of being poorly trained, but because he has an attention problem. If you train your dog’s attention, everything you want to teach him afterwards will be much easier.

Here we propose the following exercises:

1-Looking you in the eyes

This first exercise is essential to get your dog to look you in the eye. To do this you must stand in front of the dog and hide the food inside a fist. Show it to him so he knows what you are hiding. Stretch out your arm so the dog can’t reach your fist and then just wait. The dog will look at your hand, but when he sees that nothing is happening, he will end up making eye contact with your eyes. At that moment give him the treat in your hand.

Repeat the exercise and you will see how the dog understands what it consists of and you will see how they keep their eyes very clearly. But remember not to say “look at me” or anything like that. In the end your dog will be able to look at you and each time he will hold your gaze and attention for longer and longer. Be patient.

2-That he responds to his name

Normally, when we call our dog by his name it is because we scold him, because we want him to come or to go play… With so many different situations in the end your dog does not understand what his name means, so in the end he does not know what to do and ends up ignoring it.

To improve your dog’s attention when saying his name, we propose this simple exercise for hyperactive dogs.

To do this, you just have to take advantage of a moment when the dog is outdoors and at that moment you clearly tell him his name. If he pays attention to you, that is to say, he looks at you and directs his ears towards you, then you reward him. He doesn’t have to come or do anything, just pay attention to you.

As you can see, these guidelines and exercises have enormous advantages, since they introduce your dog to attention training, something essential for hyperactive dogs.

And you, do you already know how to get your dog’s attention? Do you have any tricks to control hyperactivity in dogs?

This way you will help many of our readers with hyperactive dogs to overcome different problems. You can leave us your comments here below or on our Facebook, Instagram profiles or on our Las Almenas YouTube channel, where every week we post more tips and news from our responsible breeding center for mini or toy breed dogs.

I’ll read you down here! 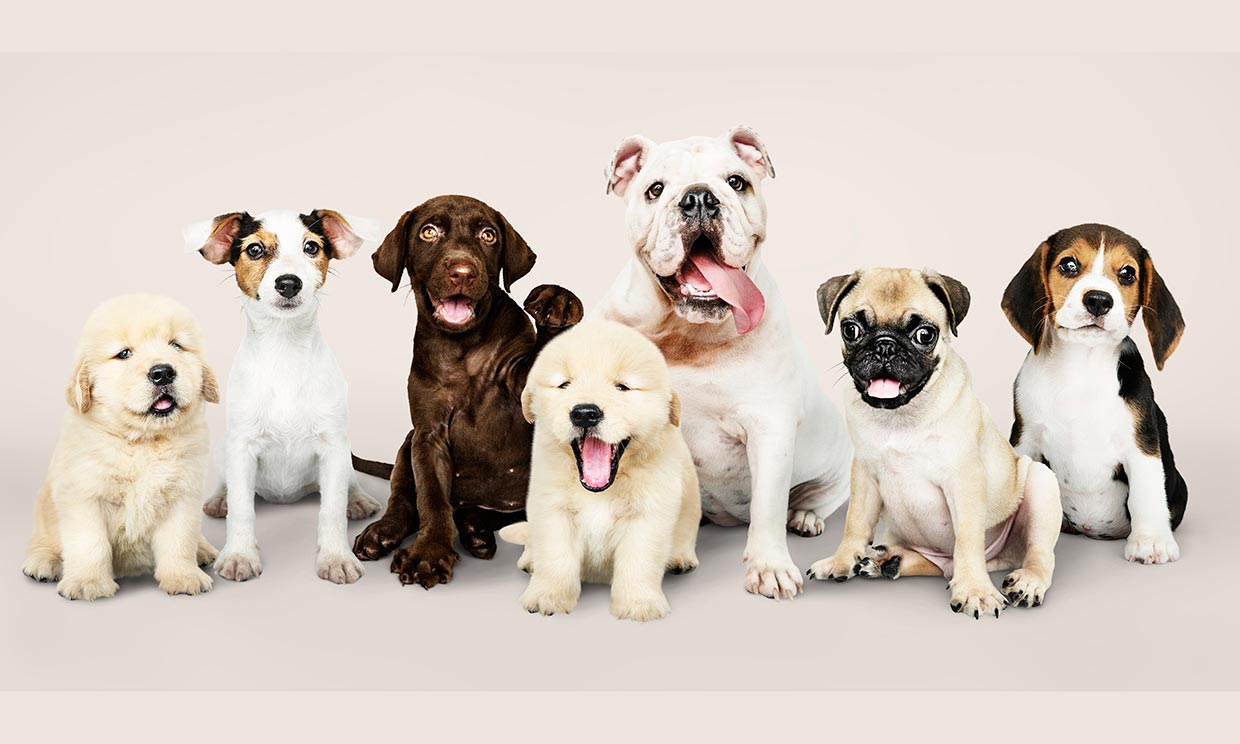 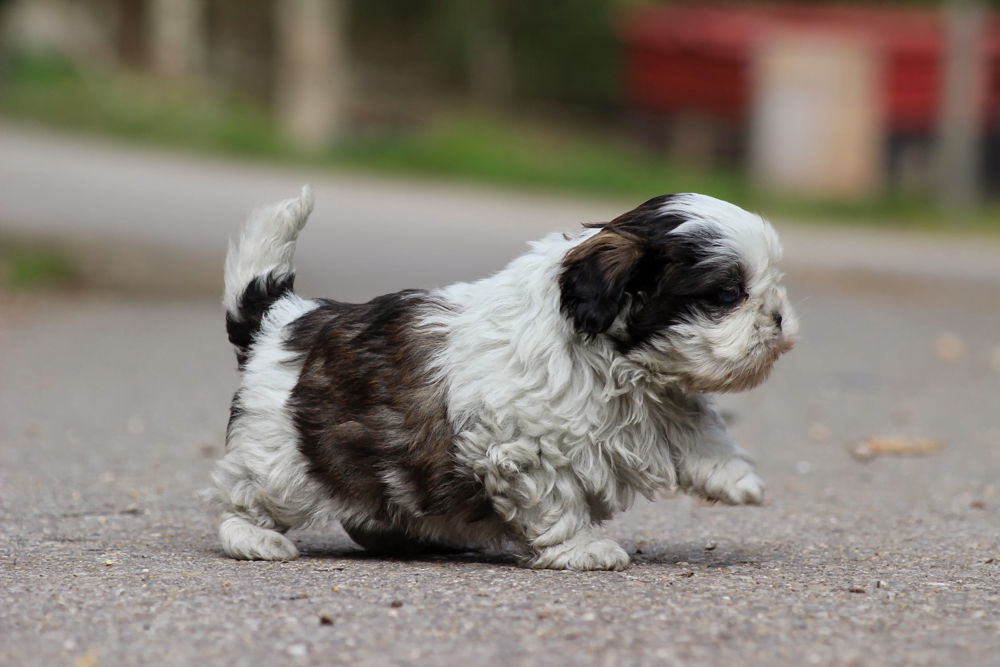 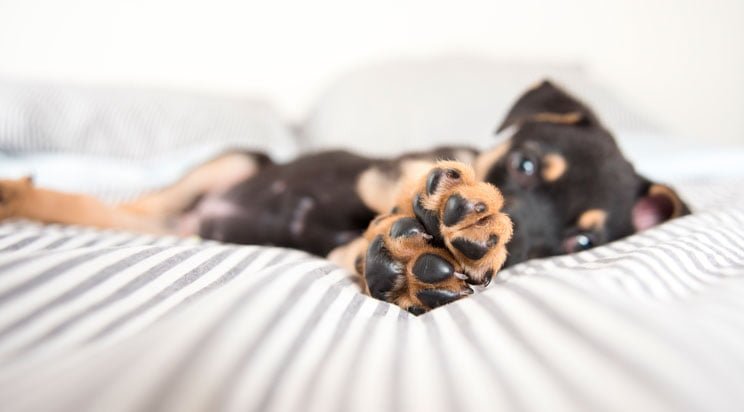 Pomeranian dog breed, what should you know? 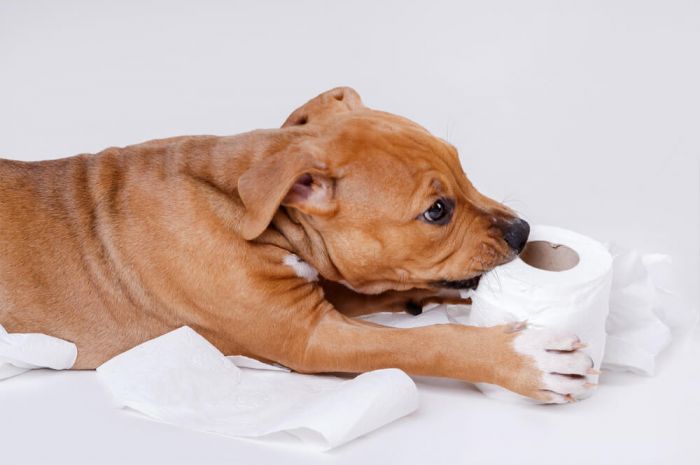 Why do dogs eat poop?